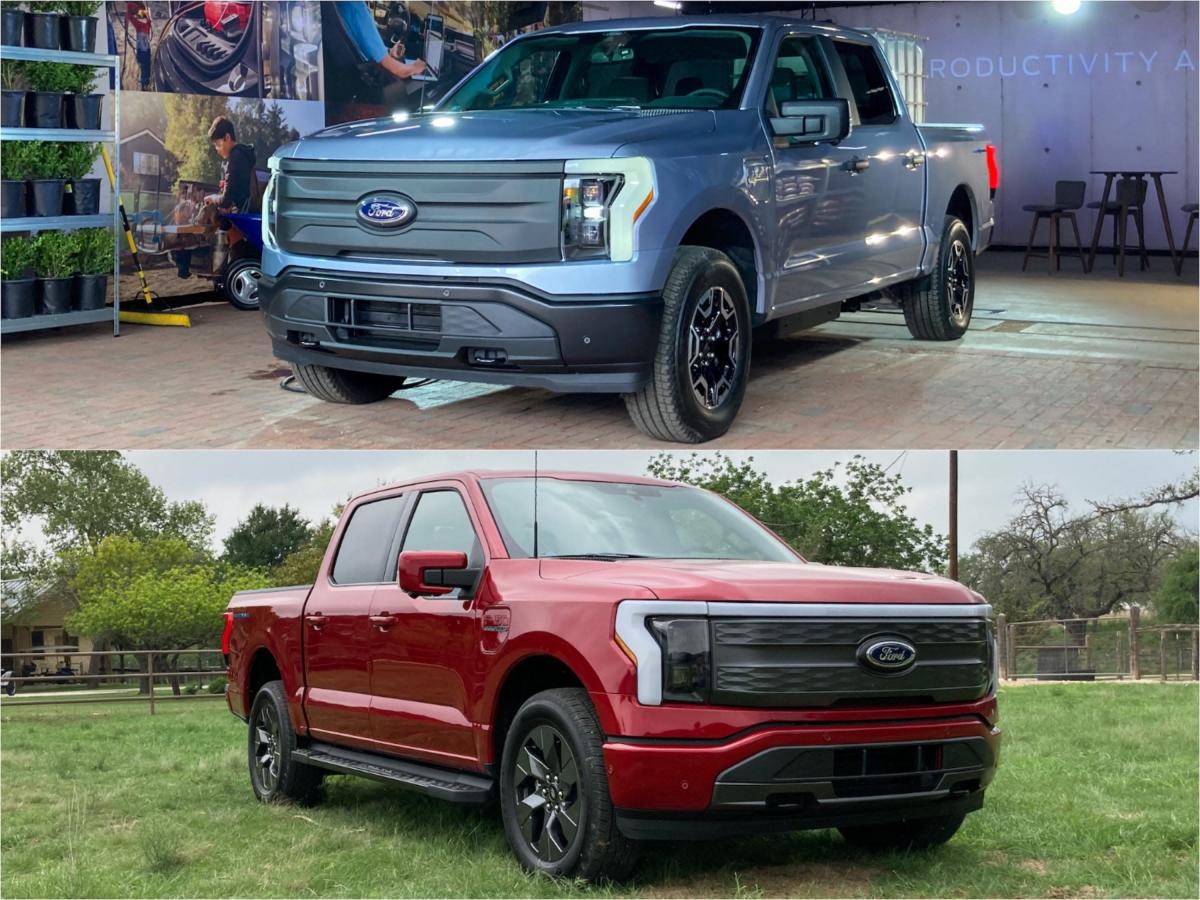 Ford’s electric F-150 is here at last. The Lightning is shipping to customers now with a starting price of $39,974 before any options and fees.

Choose a more expensive trim level and some fancy add-ons, and you could be staring down a price tag of nearly $100,000.

But what separates the most basic F-150 Lightning Pro from its upscale counterparts? We got up close and personal with the Lightning to find out.

Here are the biggest differences — and similarities — between the relatively inexpensive Lightning Pro and the pricier Lariat, which has a starting price of around $68,000.

For full transparency, the models shown here have larger batteries and some extra options, so they don’t represent the base configurations. The Lightning Pro we tested cost $56,000, while the Lariats drove cost around $81,000.

The Pro and Lariat may look quite similar to the untrained eye, but there are a few key exterior differences.

The Lariat gets a more intricate grille with a diamond pattern, while the Pro’s front end is more basic.

The Pro’s bumpers are black, while the Lariat’s are painted the same color as its body.

Pro trucks also don’t get the sleek LED light bars that span the width of other models in front and back.

The Pro gets 18-inch wheels, while the Lariat comes standard with 20-inch wheels.

Out back, the Lariat has a powered tailgate with a built-in step, ruler, and spots to clamp down materials.

The Pro’s tailgate opens manually, and the more feature-packed tailgate is available as an option.

It makes sense that the Pro is more basic overall, since it’s meant for contractors and other businesses.

Unsurprisingly, the Lariat has the most luxurious interior, filled with nicer materials, extra features, and more technology.

Read more: I got an early ride in the electric Ford F-150 Lightning. No truck has any business being this quick.

The Lariat has a leather-wrapped, heated steering wheel and plush leather seats. Front seats are heated and ventilated.

As an option, Lariats offer a giant moonroof that makes the already spacious cabin feel even bigger.

In the Lariat, you get a fold-out work surface that’s perfect for a laptop or some paperwork.

Lariats come with a large, 15.5-inch touchscreen that controls the radio, climate controls, navigation, drive modes, and other features. The manual volume knob built in is a nice touch.

Everything is more bare-bones and less focused on comfort in the Pro, but it still feels well-built.

The Pro has vinyl seats, a plastic steering wheel, and no carpeting.

Pros have a sizable touchscreen as well, measuring in at 12 inches. It can do most of what the larger display can, but Pros get more physical buttons.

Extra tech features included in the Lariat include adaptive cruise control, a wireless charging pad, a 360-degree camera, and an upgraded sound system. Blue Cruise, Ford’s hands-free highway-driving feature, is an option on Lariats but isn’t available on the Pro.

The trucks have a lot in common, too. They have the same basic layout and storage cubbies.

Both have the same 12-inch display that replaces a conventional gauge cluster.

The screen shows the truck’s battery level, range, speed, and turn-by-turn directions when navigation is switched on.

Some of the F-150 Lightning’s biggest selling points come on both trucks.

Every Lightning has a capacious front trunk that comes in handy for cargo you don’t want exposed in the bed or taking up cabin space.

All models come with Pro Power Onboard, which enables owners to use the Lightning as a giant battery bank. Here a Pro model is powering a water pump.

They all have several outlets scattered throughout the frunk, cab, and bed, but the Pro comes with a less powerful system.

Both offer dual motors, all-wheel drive, and a generous 775 pound-feet of torque. Both promise 230 miles of range, or over 300 with a larger battery. (Though the larger battery is only available to fleet customers in the Pro.)

After spending time in both trucks, I’m convinced that the wallet-friendly Pro could suffice for a lot of people on a budget — not just contractors and fleets. But the Lariat is far and away from the more comfortable and technologically advanced model.

And whichever truck you choose, you’re in for a long wait. Ford is working through around 200,000 reservations for its debut electric truck.