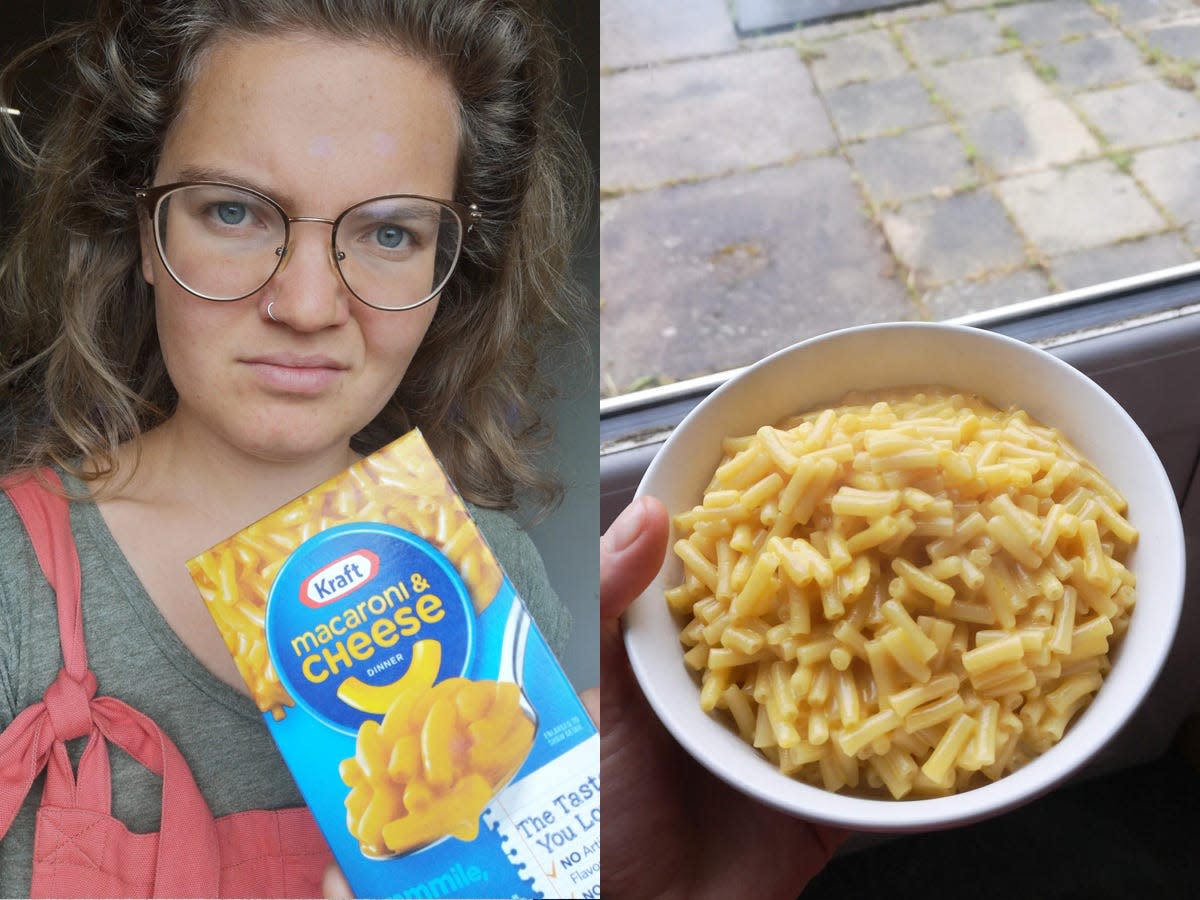 As a Brit, there are some things in American culture that boggle my mind. One of them is the cult-like status held by Kraft boxed macaroni and cheese.

This convenience-food phenomenon seems to be an almost universal American childhood experience, transcending class boundaries and invoking a wave of nostalgia nationwide when mentioned online.

As far as I know, we don’t really have an equivalent to it in the UK, either in terms of the product, or the emotional response it brings about. So, obviously, I had to try it for myself to see what all the fuss was about.

Editor’s Note: Kraft sells a few variations of mac and cheese around the world — and you can purchase its Cheesey Pasta in some parts of the UK. It apparently doesn’t taste similar to the American version.

I had to order the box online.Fliss Freeborn

I’m sure there are supermarkets in the UK that stock American boxed mac and cheese. Unfortunately, I don’t live near any of them, so I ordered it on Amazon.

It arrived the next day, and I was surprised at how big the box was — it said it fed two to three people. I was expecting it to be just a single portion, which is the case for a lot of prepackaged convenience food.

Preparing this was easier than making mac and cheese from scratch, but it required more effort than I expected

With our rough UK equivalent of pot-noodles or mug-shot pasta sachets, you simply pour boiling water over everything and let it sit for five minutes.

This mac and cheese needed two extra ingredients, milk and butter, plus a pan in which you had to first cook the pasta.

I cooked the pasta according to the instructions but salted the water first out of habit even though the instructions didn’t say to do this. In hindsight, this was a slight mistake as I also used salted butter when making the sauce, so it tipped everything just a little off balance.

The butter was measured in tablespoons, which was fine. But finding 1/4 cup of milk was more difficult due to me being stubbornly European. I had to google what the metric equivalent was.

I even did a bit of mise en place, measuring out my butter in a ramekin and placing the exact quantity of milk in a glass beforehand. This is wonderfully ironic because when I make mac and cheese from scratch, I never measure anything properly.

The color of the cheese sauce really threw me off

Up until now, the process had been pretty mundane. But when I opened the sachet of cheese-sauce mix I actually yellowed out loud.

The sauce powder was violently orange. More orange than kumquat in a tanning studio, in fact. It also smelt exactly like a brand of cheese puffs we have over here called Wotsits, and I still can’t decide whether this is a good thing or not.

The sauce seemed a little runny when I mixed the powder into the paste, but the box had an image of a cartoon drip of sauce running off of a spoon, so I was reassured.

I didn’t have high expectations, and I thought the pasta was OK

Look, I know this is instant mac and cheese so I didn’t go in with high expectations.

I thought it was very OK — nothing more, nothing less. Oddly, there was a creeping sweetness to the whole thing, even though sugar was not on the ingredients list.

And sure, it was cheesy, but not in a blow-your-socks-off kind of way.

It could’ve used some black pepper or a teaspoon of mustard to cut through the one-dimensional creaminess, but I wanted to have the authentic experience so I refrained from putting my own spin on things this time.

And although I’m lucky enough to have a full set of decent teeth, I wasn’t required to use them, as the dish was very spoonable and soft.

Of course, it’s completely acceptable as a foodstuff — we still ate the lot — but the word that springs to mind after eating a bowlful is “lackluster.”

If I had nostalgia for the dish, I’m sure I would’ve appreciated it more

I imagine there are a lot of ways to upgrade the mac and cheese.Fliss Freeborn

I can absolutely see why kids would go wild for this, especially picky eaters who aren’t so good with stronger flavors or textures. It’s also a very low-effort dinner — and you can make it more of a meal if you add a few extras (capers, black pepper, ham, veggies, etc).

Perhaps I’ve missed the point entirely about eating this as an adult. Perhaps you’re not meant to care about how it really tastes nor turn your nose up because it’s not perfectly balanced as a dish. Perhaps the whole point of eating it is to be transported back to being 8 years old again.

Framing it this way and now knowing how it tastes has given me a better understanding of the cultural phenomenon of boxed mac and cheese.

It’s just a shame I’ll never truly be able to experience the nostalgia that comes with it.

Read the original article on Insider