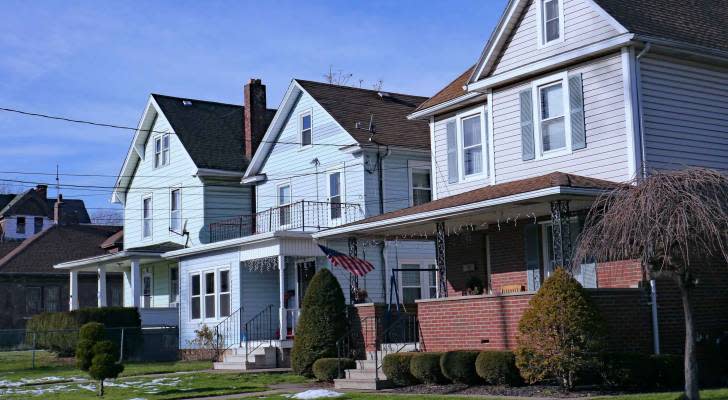 The interest rate on America’s most popular home loan moved back up this week, reaching its highest level in nearly 13 years, and widely followed survey shows.

The historic arises in the 30-year mortgage rate — now two full percentage points higher than at the start of the year — is beginning to have a slight cooling effect on the market.

Aspiring buyers are being priced out and competition is softening ever so slightly as the cost of borrowing for a home has spiked 55%, according to some estimates. Though some markets remain hotter and more committed than others.

But the near constant rate hikes could moderate, according to Mortgage Bankers Association economist Mike Fratantoni, who said this week that they are likely to “plateau near current levels.”

Get the latest personal finance news sent straight to your inbox with the MoneyWise newsletter.

The average rate on a 30-year fixed mortgage rate jumped this week to 5.27%, up from 5.1% a week ago, housing finance giant Freddie Mac reported Thursday. Last year at this time, the 30-year rate was 2.69%.

The upward move comes amid a newsworthy week for the economy, which is experiencing the highest inflation it’s seen in decades. To fight off sky-high consumer prices, the Federal Reserve on Wednesday raised its benchmark interest rate by a half percentage point, the largest rate increase since 2000, making all sorts of consumer loans more expensive.

As fewer borrowers can afford to finance the purchase of a new house, record-high appreciation in the housing market is expected to slow.

Higher rates across all types of mortgages have held back buyers as well as those seeking to refinance their loans.

The increase in rates over just the past two months has triggered a 49% drop in refinance activity, says Joel Kan, MBA’s associate vice president of economic and industry forecasting.

The five-year adjustable-rate mortgage also moved higher last week, averaging 3.96%. That’s compared with 3.78% a week ago. A year ago at this time, the 5-year ARM averaged 2.7%.

With a 5/1 ARM, the interest rate is set for the first five years, then adjusts annually — sometimes going up sharply — over the remaining course of the loan. ARMs, however, have lower initial rates than longer loans. They can be attractive to some buyers who don’t plan to be in their homes for a long time.

These loans typically adjust in tune with the prime rate. If rates were to fall after an initial period of an ARM, borrowers could potentially refinance into a lower rate at a longer term. But there’s also the risk that rates go higher.

Yet there’s a silver lining to the shifting market. The number of homes for sale, which is still below pre-pandemic levels, is showing signs of improving, Berner says, citing a recent 3% increase in the number of new listings on Realtor.com compared with the same period last year.

“As prospective buyers budget for a new mortgage and evaluate whether to continue their home search in light of affordability challenges, they might find that the competition is thinning out just as more home options come onto the market,” he says.

Even so, buying a home is now 55% more expensive than it was a year ago, according to the National Association of Realtors.

“Mortgages now compared to just a few months ago are costing more money for home buyers,” Lawrence Yun, the group’s chief economist said during a nationwide meeting for real estate agents this week. “For a median-priced home, the price difference is $300 to $400 more per month, which is a hefty toll for a working family.”

Get the latest personal finance news sent straight to your inbox with the MoneyWise newsletter.

This article provides information only and should not be constructed as advice. It is provided without warranty of any kind.